The Surfer and the Mermaid (with Ted Grambeau)

The Surfer and the Mermaid is a stunning children’s book bringing together the creative talents of reknowned surf photographer Ted Grambeau, writer Tim Baker, and designer Graham Murdoch and featuring surfer and anti-whaling activist Dave Rastovich, and mermaid-model Hannah Fraser.
Ted Grambeau originally shot the images of Rastovich and Fraser swimming with humpback whales off the islands of Tonga as part of a project promote Dave’s work in marine conservation, as co-founder of Surfers For Cetaceans.
“We rocked up to Tonga and Bali Strickland was filming it and I was going to shoot stills.,” says Grambeau, “but I ended up with Hanna as a mermaid, getting all these shots that are really beautiful but I didn’t really have a format for them. Effectively my mission was shooting Rasta for his stories in surf magazines to highlight the Whale issue whereas almost all the shots of Hanna are really poetic – really just surreal, beautiful shots. So I ended up with a ton of beautiful shots with nowhere to go.”
When writer Tim Baker saw the images, he noticed a natural story-line emerge, of a young surfer entranced by the waves and given entry to the underwater world. Graphic designer Graham Murdoch has fashioned Grambeau’s images and Baker’s words into a delightful narrative journey. The result is an extraordinary children’s book with a powerful environmental message that will delight and inspire parents and children alike. The images depict a surreal underwater world where the young surfer is led by an enchanting mermaid into the depths to meet her marine friends.
The whales are wary and skeptical of the creature from above, whose kind have wreaked such havoc on the marine environment.
A sudden awakening and burning determination is sparked in the boy, the he and all who ride the waves must do more to protect the oceans which provide our playground. The lingering message is one of hope, optimisim and a call to action for all lovers of the ocean, to rally in defence of the marine environment.

The Surfer and the Mermaid has been adapted as an enchanting piece of children’s theatre directed by Leland Kean and the Merrigong Theatre Company with the Bleach Festival. It is set to tour nationally in 2020. Read more here. 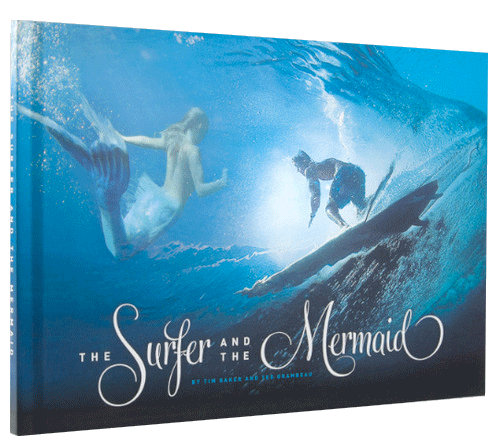 GOODREADS REVIEW. 5 OUT OF 5 STARS: “This book is an amazing collection of photos by Ted Grambeau. The story Tim Baker wrote to go with the images is simple, powerful and uplifting. I loved this book and was glad to attend Somerset Literary Festival and be inspired by the positive vibes Tim exudes.” Jill Smith.